A pipette is a laboratory instrument used to measure out or transfer small quantities of liquid, in volumes of milliliters (mL), microliters (μL). It is used in a wide variety of experiment processes in chemistry, molecular biology (biotechnology), medical science, experiments in the field of natural science in general, analysis of food and chemicals, food safety inspections and inspections in clinical examinations.

Glass pipettes are excellent in chemical resistance. Since dry heat sterilization is possible, it can be used repeatedly by washing and sterilizing depending on the type. Plastic pipettes such as polystyrene are basically disposable, so there is no cleaning time involved and pre-sterilized items are convenient in preventing contamination. Pipettes are generally used for moving small amounts of liquid or when measuring and dispensing liquid in mL units. When measuring less than 1 mL, Micropipettes are more accurate and user-friendly.

A pipette made of thin glass with a tapered tip. Some are plastic. They are often disposed of after use to prevent possible contamination/cross-contamination and mainly used when you want to handle solutions individually, such as medium transfer and sampling.
Same as with the Komagome pipette, a rubber bulb is usually attached to the top of the pipette to act as a pump to aspirate and discharge liquid. It is suitable for moving small amounts of liquid that does not need precision measuring.

It is either made of glass or plastic, has a round bulge near the top of the pipette body to disperse the bubbles in the liquid, and can measure foamable liquids safely. A rubber bulb is usually attached to the top of the pipette to act as a pump to aspirate and discharge liquid. 2 mL, 5 mL capacity types are common. 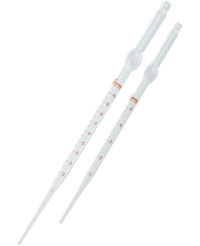 Measuring Pipettes are made out of glass or plastic with the volume in increments, marked along the tube, and can fairly accurately measure liquid. In the past, the method of using this pipette was to put the mouth directly on the open end of the pipette on top to aspirate the liquid like a straw (a method known as, "mouth pipetting"), however, this method has the potential danger of accidental ingestion. Now, these kinds of pipettes are generally used with an automatic pipette pump (pipette controller), or a rubber suction device (safety pipettor), especially in cases when handling potentially harmful/hazardous reagents and/or bacterial fluids.
Depending on the length and scale of the pipette, there are the following types of pipette designs. 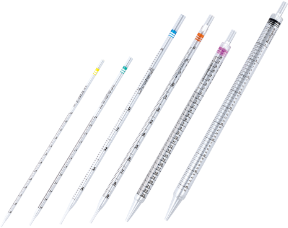 A pipette made of glass and has a single graduation mark on the glass tube above the bulge in the middle. Although the liquid measurement accuracy is better than other measuring pipettes, accurate measurement requires some skill. In the past, the mouth was used to aspirate the liquid, but now an automatic pipettor (pipette controller) or a rubber suction device (safety pipettor) is used for safety. If liquid remains in the tip after discharging the liquid, warm up the bulge by hand to expand the air inside to push out the remaining liquid.

Pipettes that can measure liquid in microliters (μL) with precision, and are most commonly used in experiments, research and analysis in the field of life science. They aspirate and discharge liquid by volumetric displacement of air by the vertical movement of an internal piston. As for the part that comes into contact with liquid, disposable plastic tips are mainly attached to the pipette nozzle and used. There are variable volume types that can be adjusted freely within the setting range, and fixed types that have the volume set in advance. Periodic capacity inspections and maintenance are required to maintain accuracy and repeatability. In addition, pipettes with a volume of 1 mL or 5 mL or more, may be called a macropipette for convenience. 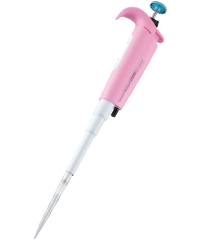 These pipettes are designed for specific applications, such as glass tip Micropipettes which are suitable for environmental hormone analysis, and large volume ultra-macropipettes that have the ability to dispense in 50 milliliter volume. 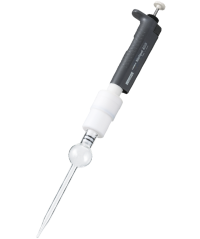 We can manufacture custom-made pipettes tailored to each customer's needs. We also accept customization of existing / stock pipettes.

Since long ago, the first simple pipettes for liquid sampling were made in glass, such as Pasteur pipettes, which have been used for experiments in a wide range of research fields. After graduated pipettes, the first micropipette was patented in 1957 by Dr. Heinrich Schnitger (Marburg, Germany). The founder of the company Eppendorf, Dr. Heinrich Netheler, inherited the rights and started the commercial production of Micropipettes in 1961. The adjustable micropipette was a Wisconsin invention developed through interactions among several people, primarily inventor Warren Gilson and Henry Lardy, a professor of biochemistry at the University of Wisconsin–Madison.
Nichiryo is the first company in Japan to released the domestic production of the micropipette called "JUSTOR" to the Japanese market in 1975, and has continued to design, manufacture and sell Japanese precision Micropipettes globally. In addition to the micropipette, Nichiryo also manufactures and sells macropipettes in mL units, pipettes using special detachable glass tips, and custom made OEM pipettes.